After a freakin 6 hour drive I received a city wide text alert warning people to stay indoors due to poor icy road conditions. The whole city was shut down. I was so excited, Portland, Oregon is the mecca for Craft Breweries over 53. We did end up going to a few in the following few days. You can check the full list of Portland Craft Breweries here. 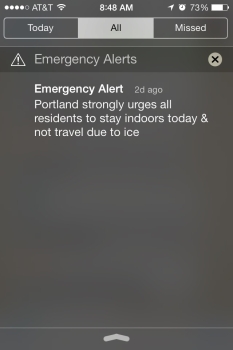 The only pub that was open was Rock Bottom Brewery. I mean it was a perfectly acceptable place but, I was too pissed to enjoy it. So my apologizes to my server if I seemed a little cranky and thank you for trudging through the 5 inches of snow to come to work. Without you I wouldn’t have any craft brews on my first day in Portland.

I was not in the mood to take any pictures of their food. It wasn’t anything really special. Typical burgers and seafood chowder, I have to say though it is better than average compared to typical bar food.In that I mean it wasn’t dripping in grease and batter.

Tasty n Alder is a local favorite, with a focus on local ingredients. Expect line-ups, we went there for brunch the day after the city was shut-down by a snow storm so the menu was limited due to the lack of delivery.

Sicilian Hash​​ with braised pancetta, arrabiata & over easy egg . Overall this was a decent dish, the hash and vegetables were still crispy. After a while this dish became way too salty.

Poached apple, bacon and cheese, salty, tangy, smoky and sweet, it was decent but, I would not order this again, it was too run of the mill and expensive for half an apple at $6.