Heritage Asian Eatery will be serving up an Asian-inspired brunch menu from 10 a.m. to 3 p.m. on Saturdays and Sundays.

The Calabash is starting a brunch service and we got to try a 3 course menu paired with cocktails. This is a cool joint that makes you feel like you’re in the Caribbean. The Iive music made for a very fun and vibrant room.

We started off with a yogurt lassi with rosewater, mint and a sprinkle of pistachio. It was really refreshing and light. There was also a starter of  fritters that were dense and moist. They were served with mango and guava butters. A very decadent start! 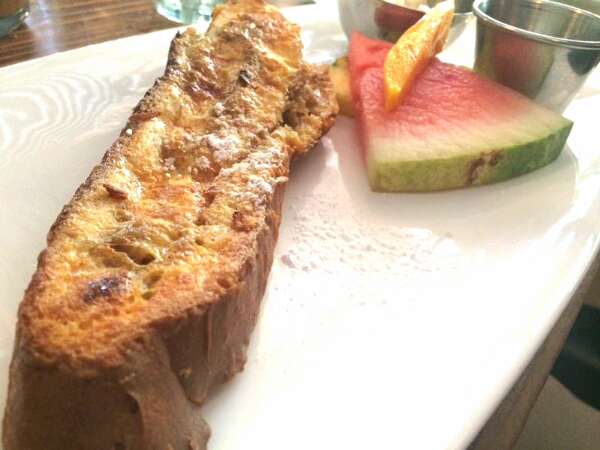 Escovitch Fish – The snapper was tangy and meaty and was cooked perfectly. The fried plantain was sweet and savoury…I could’ve eaten a whole plate of it! The mimosa was nicely balanced and was a nice refreshing start. 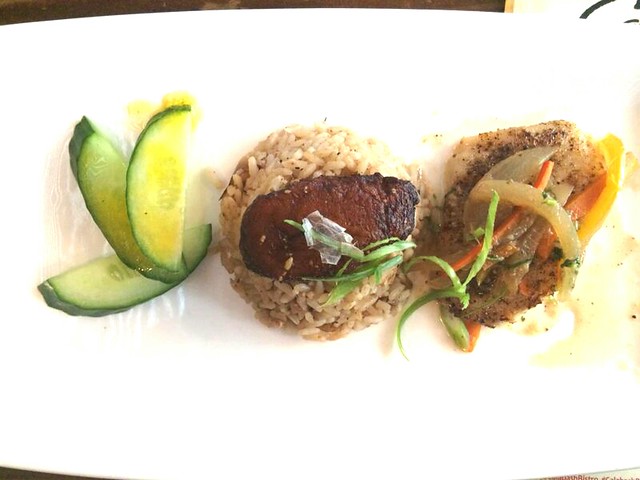 Oxtail stew – The ox is spiced and roasted and then braised. It was really moist with a good amount of heat. This is what I was waiting for! The dish worked well by breaking the yolk and mixing everything together. The dish was paired with a Dark & Stormy. What can I say..one of my all time favourites, but this one was pretty epic. It was topped with fresh coconut shavings and a sprinkle of cinnamon. I’ll return just for this drink! 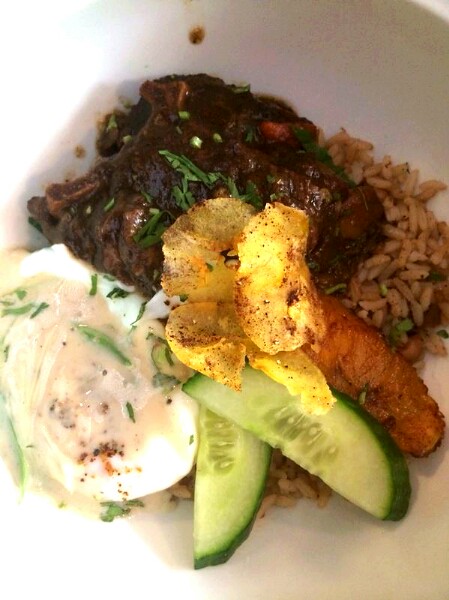 Salara French toast – the in-house baked bread is a traditional Guyanese bread with a coconut filling. It was nice and crispy on outside and moist on the inside. The banana cream and mango syrup were not too sweet and really worked well with the toast. The dish was served with the Coconut Jumby.
Rum shaken with coconut water, muddled lemongrass, mint and finished with lime zest and coconut shavings..what more is there to say other than well done Calabash! 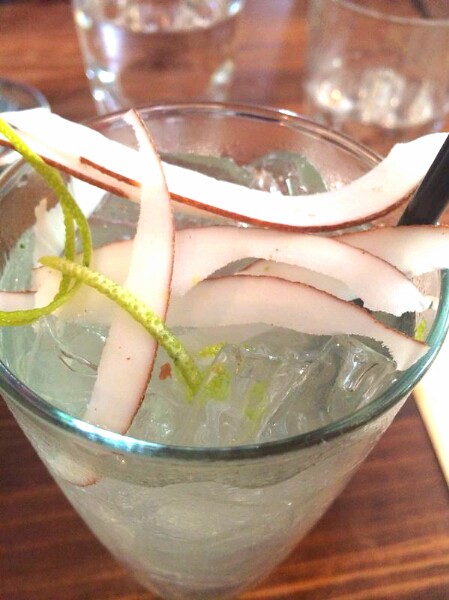 Cuchillo, opened a few weeks ago in the heart of downtown east side where Railtown meets Chinatown. They have seen their share of protests so I decided to go and show my support. Cuchillo serves up creative Latin American dishes that are meant to be shared.

Unfortunately, they were just vandalized a few hours before, so they had to board up one of their windows. Don’t let this deter you from going though, this restaurant is worth a try.

They have this beautiful tall table parallel to the bar and in the back they have lounge area with comfy recliners. The atmosphere is friendly and relaxing, décor is similar to the Diamond in Gastown, except Cuchillo’s service is far superior, everyone was welcoming and staff was knowledgeable.  The service I received at Diamond was so bad that they were added and moved up to the top of my blacklist, the only restaurant on this list because of poor service, the others I was due to food poisoning. I will save that story for later.

They serve my favourite mojito’s in town. I like my classic drinks to stay classic. I stay away from any berry infused drinks. Cuchillo topped their mojito’s with dark rum. Yummy! My friend said it was too minty but, I I thought it was the perfect hit.

Corn bread azul with guajillo chili butter $7 was made out of blue cornmeal resulting in a grainier texture. It was crispy on the outside and soft on the inside. Corn bread are usually very dense, Cuchillo’s was fluffier and moist. The chili butter gave it some nice heat.

White bean parmasean fundido $8 with corn chips is quite filling. It is essentially a white bean dip, with pumpkin seed, cotija Monterey jack, sardo parmesan and two other Argentinean cheeses. The cheese was sharp, heavy on garlic and the bean was a perfect consistency. You’d need an appetite, this is a heavy dish

Mixto Traditionale, octopus, sidestripe prawn, rockfish, mussels, clams, sweet potato puree. $14. After having the last two dishes that had huge flavor, the ceviche was relatively light. The seafood was fresh but, I would have liked more seasoning.

Mole Lamb albondigas, sardo parmasean browned garlic popcorn $8. This was my favourite dish, the lamb which was served in a lamb-ball was amazing. Think the lamb mixture was mixed with beef, I don’t get the intense gaminess lamb flavor. It was juicey and topped with popcorn which gave it a nice texture. I have to admit I was sold on the popcorn first before our server even mentioned lamb.

Morita chili bbq pulled pork. This pulled pork taco was pretty run of the mill. The bbq sauce was very nice, sweet, not overly savoury and the pulled pork wasn’t drowning in the sauce. I’ve had so many pulled pork dishes that I getting sick of it. This would be my last pulled pork dish for the season.

As for this bullshit about it being expensive, well it is more expensive than Everything $5? Yes, the quality of the food is far superior, what do you expect to pay for quality ingredients, of course it costs more. Share plates range from $6 – 14, you get two decent sized tacos for $8 and, entrees range from $18 – $24. The prices are a little lower than what you would find in the heart of downtown and the food is crazy good. It’s not an Applebee’s, you won’t get bottomless fries and a heaping plate of pasta bigger than your head, that’s just nasty. So before you whine that it’s too expensive, go out to comparable restaurants around town to get some perspective.

DTES is not exactly a tourist attraction but, some parts of Gastown isn’t either. If I never venture out then I would not get a chance to experience gems like Pidgin and Cuchillo. Try it out yourself before you turn up your nose at these restaurants because of their location.

Tarren Wolfe, owner and inventor of Living Produce Aisle and a Dragon’s Den success story, takes fresh and local produce to the next level. Located in Gastown, customers will be able to choose from a dozens of different micro greens and herbs and have them freshly cut right from the urban cultivators.

Their menu created by Four Season’s Executive Chef Ned Bell, mainly consists of smoothies and salads. A delicious recipe below – tried and tested.

Urban cultivator was only offered for commercial uses, have been miniaturized for consumer consumption. Recommended for anyone who wants to take control of what they eat and start growing their own greens and herbs 365 days a year.

Skeptical at first, while I get the whole grow your own food sell, how was this green, this thing is on 24 hours a day, everyday. Upon further discussion, Urban Cultivators has the same energy output as a dishwasher.

Ned Bell was spending around $2000/ month on fresh herbs and micro greens at the Four Seasons, an investment in one of these industrial sized ‘farm in a box’ retails for $6000 turned out to be a huge money saver. The home model produces about $1000 worth of greens per year, paying for itself in approximately two years.

For regular consumers like myself, I’d stick to purchasing pots. The greens were perfect, no yellowing, no holes where bugs nibbled. Walking in there are rows and rows of green machines, not even a designer landscape artist could reach to this level of perfection.

All seeds are non-GMO and organic, Wolfe’s main supplier is Mumm’s from Saskatchewan.

Puree everything in a Vita Mix Blender. Check for seasoning and adjust with sea salt and pepper to taste.

Food Persuasion’s annual 2012 Vancouver Holiday Menus Guideis here featuring Christmas brunches, lunches, dinners and buffets. This is still a work in progress, if you would like to add your Holiday menu on this list please email foodpersuasion@gmail.com or through the comment section. New this year is my Turkey To Go Section.

It was a packed house for Saturday night at 9PM. Upon walking in you sense the Gastown hipster vibe, you when it’s uber cool to be anti – pretentious, they are so cool that they are turning pretentious, without realizing it, it’s a personal observation.

Now the food…
Slow-cooked natural Angus beef short rib, smoked salt, hay-infused jus. One of the more popular items on Wildebeast’s dinner menu. Ribs were souveed for 2 days then finished on the grilled. As expected very tender and smoky. Great except for my first piece, I grabbed the rib on the left, the entire piece was fat and bone. 3.5/5

Grilled beef tongue, wild mushroom consommé, toasted grains, mustard greens. Our favourite dish, the Asian inspired shiitake and dashi mushroom consume was made in-house, wow it was packed with flavor. I threw out my table manners and greedily slurped up the broth. 4.5/5

Pork jowl, long pepper-scented oats, bourbon barrel-aged maple syrup. Don’t be put off by the mush, which would remind you of oatmeal. Eat it together and you will understand and appreciate the combination. Sweet and salt with a little bacon fat, delicious. I mentioned, if my mom made oatmeal like this she wouldn’t have trouble feeding me in the morning. Yes, I was fussy even then. 4/5

The service was satisfactory, it was great in the beginning then as the night progressed they got surlier. By the end of the night I was afraid to ask for a refill of water, less they gave me the glance that said “what you need water? Now?!

All in all  I would head back, the food was good enough for a second visit.

Halong Bay is a newly discovered gem near my workplace. All my co-workers have been continually raving about this joint. Halong Bay serves simple but fairly good Vietnamese cuisine. Their menu is pretty standard of what is found at other restaurants.

Their décor is worth a mention and not because it is gorgeous. With laminated pictures of their menu items plastered on their pale blue walls.

Lemongrass Vietnamese sub was decent very typical of what you would get. $4.75 3.5/5