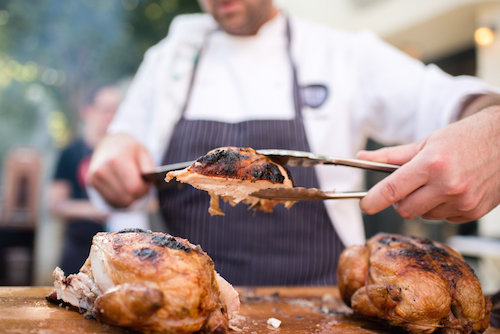 Railtown Cafe’s perennially sold-out Saturday al-fresco-style Tailgate Barbecues are back for two exclusive events at their original location in the heart of Vancouver’s historic Railtown District on August 18 and 25 from 4 to 9 p.m.

Railtown Cafe will fire up their custom-built, 12-foot smoker/barbecue barrel to heap plates high with mouthwatering, slow-smoked brisket and pork shoulder and beer-brined chicken and brats, as well as a choice of made-from-scratch sides.

Tailgaters can also quench their thirst and stay ‘hydrated’ thanks to Railtown’s rotating selection of local craft beers on tap or sip on house-made Sangria and Lynchburg Lemonade as well as wines available by the glass and bottle.

The August 25 Tailgate Barbecue event also coincides with the second annual Monstercat Compound block party, which takes over the Railtown neighbourhood from 2 to 9 p.m. and features live music and DJs on two stages in addition to workshops, carnival games and art exhibits.

TICKETS
Tickets for the Railtown Tailgate Barbecue events on August 18 and August 25 are available for $29 per person ($19 vegetarian) plus tax, both online at www.railtowncafe.ca/events and onsite. All tickets purchased online in advance include a complimentary drink voucher (up to $6 value).