**things have been a little technologically shaky here, the pictures will be back up asap**

Another year of EAT! Vancouver took place over the weekend and featured some big name chefs and cooking shows. As part of the media event, we were invited to a number of exhibitors to sample some of their featured treats and to talk to them about their products.

One of the first stands was Urban Fare. We’re all more than familiar with them but they featured a $2,600 bottle of water that was crusted with 10,000 Swarovski crystals! (I wonder how much the deposit is?) 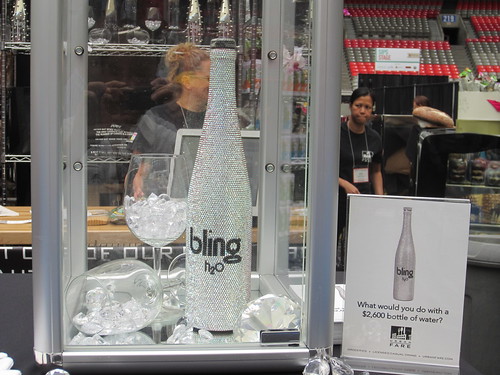 There were some other local products being showcased such as coffee, meats and cheese. One of my favourites was the Britannia 5 year aged cheddar.
Next was the Hawkers Market which had a number of interesting vendors. First, we tried some treats from the Wonton Girl which were crispy and moist.

A very unique item we tried next was a Vegan Coconut Bacon which were little crispy coconut flakes. These were nicely smokey and more on the sweet side but would go well sprinkled on top of almost any salad or in a sandwich.

Next we sampled a Mexican spread called Cajeta. It’s a caramel like spread that’s made with goat’s milk and sort of reminded me of nutella. I was told that it’s a traditional condiment that’s found in almost every Mexican home. It’s typically vanilla flavoured but there was also espresso and my favourite…rum! I can put this on anything which is apparently how it’s used, but usually in desserts like crepes or in cookies and on cakes.

We moved onto the Bites section of the event which was setup like a mini food court but many vendors were not up and running yet. We tried many dishes from Max’s Restaurant including the Pancit Palabok and Pork Adobo which were very nicely prepared and very flavourful. The crowd favourite was the Halo Halo though.

Now it’s onto the Sips section which is obviously a nice way to quench your thirst after sampling so many treats. The local craft breweries were well represented but the wineries were noticeably absent. A highlight for me included a Chocolate Stout from Samuel Smith’s which had a really intense chocolate profile and was very well balanced.

Another brew that stood out was Parallel 49’s Tricycle Grapefruit Radler. This is a light sipper that had a nice citrus bite to start which then gives away to a sweeter body..almost like biting into a grapefruit. This will likely make its way onto a few patios this summer.

There were many other interesting products and exhibits to explore. A noticeable trend that has been ongoing for quite some time is the push for vegan and gluten free products which were well represented. Another theme was the focus on understanding the sourcing of key ingredients. It’s always good to see that vendors are more concerned with where their products come from and how they are processed.