Earls has decided to join the brunch crowd and has put out a new menu to cater to the growing demand for weekend brunch. Chef Braden Matthews served up 4 courses from this menu.

We kicked things off with their Signature Caesar served with a beef jerky stick and pickle wedge. The use of both red and green tabasco along with horseradish gave it a nice kick but it wasn’t too spicy overall. We definitely enjoyed the early morning drink! 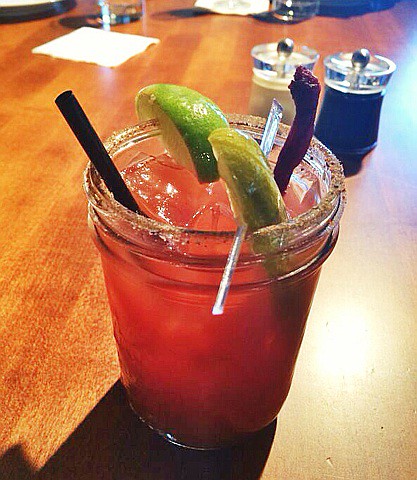 The first course was the granola and yogurt parfait. It had a nice medley of oats and nuts which was made in house. It was topped with a tangy greek yogurt parfait which appeared to be slightly whipped and made it slightly lighter. It was also served with a side of agave syrup which worked well as people tend to have their own preference for sweetness. It was nice to have the granola on the crumbly side without a lot of syrup or sugar. It made for a lighter dish but overall it was still pretty hearty given the ingredients. I know many people don’t order granola for breakfast but this one is worth a try. 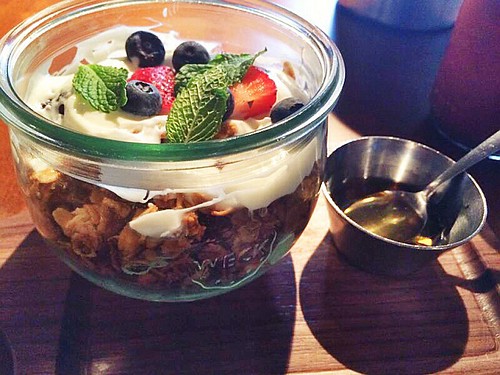 The second dish was eggs benny with Virginia ham on top of grilled sourdough. The eggs were soft poached and nice and runny. The hollandaise was noticeably lighter than almost all other sauces around town and was quite runny. I think many people order hollandaise on the side but this one worked well the way it was served. We also picked up hints of lemon which added a nice freshness to it. The grilled sourdough had a nice crunch to it but it also had a noticeable sour finish and almost overpowered the rest of the dish. There was also a side of smashed potatoes which had a very nice crunch to it. They were tossed in a confit of garlic butter with rosemary and thyme. We were pretty full from all the food but could’ve easily eaten a whole plate of it! 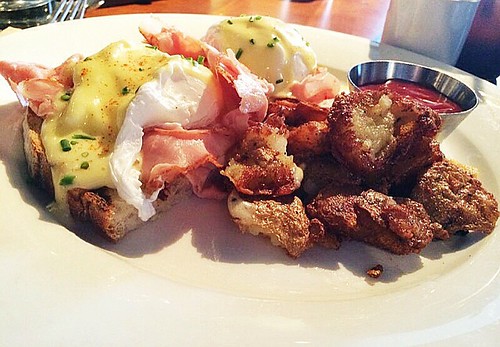 The third course was eggs Florentine with parmesan cream sauce, spinach and mushrooms. The eggs were cooked in a skillet and served over a creamy polenta. The dish sounds heavy but it was surprisingly light. The spinach and mushrooms didn’t play a big role in this dish though. A few more grilled mushrooms would’ve added more character and depth to this dish. We would’ve also liked a tad more seasoning. There was also a side of grilled sourdough toasts which were lightly buttered. These worked well with soaking up the creamy polenta and eggs. 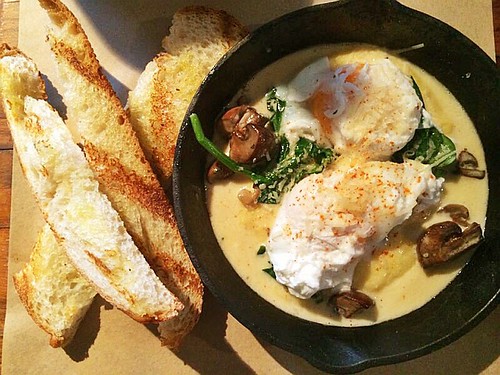 Last but definitely not least was the sourdough French toast…yes, more sourdough. This was a thick cut toast as you would expect but more so than other places that serve a similar dish. The bread was light and fluffy which again made for a lighter dish overall. The outside of the toast was nicely battered and crisp when served. The dollops of chantilly cream and a light drizzle of a salted caramel sauce complemented the dish overall. Again, as in the eggs benny dish though, we found the sourdough overpowering. 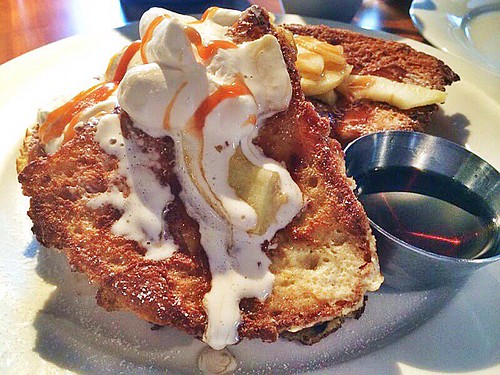 Brunch food is hard to make healthy or light but I think there was a conscious effort to do so in this case which is commendable. The use of sourdough in the dishes worked well in some cases but overall we found the taste overpowering even though we are naturally big fans of the bread itself. It’s good to see more choices for brunch in Vancouver and hopefully we will be seeing more from Earls as it joins the brunch crowd!

Guest Blogger: Simon Wong, who is still pissed off because I called him a co-eater in one of my previous posts. Soo prissy. Thank you for your post.