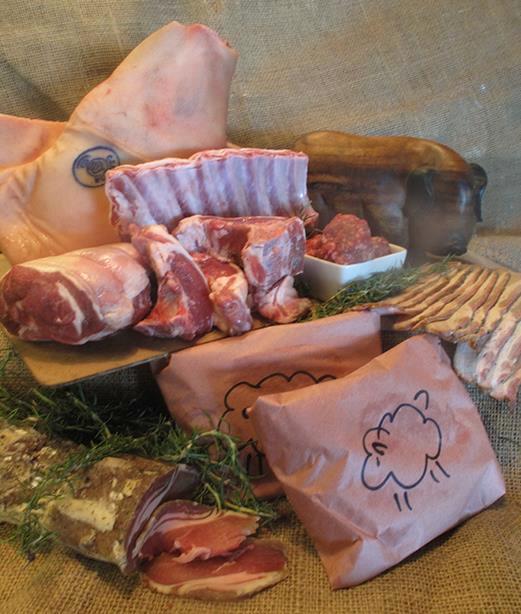 VANCOUVER, BC — Conscious consumers now have a new option when it comes to both finding an ethical source of meat and supporting local farmers — the Beasty Box.Created as a partnership between Re-Up BBQ’s Michael and Lindsay Kaisaris and Urban Digs Farm’s Julia Smith and Ludo Ferrari, this “nose-to-tail” butchery box subscription was introduced to offer a no-fuss means of eating right — in every sense of the phrase. Similar to the community supported agriculture (CSA) model that offers weekly farm shares of vegetables and fruit, the Beasty Box consists of meat from a hyper-local collective of farms — Urban Digs Farm (Burnaby), Gelderman Farms (Abbotsford), Rehoboth Farm (Chilliwack) and Pasture Land Farm (Barnston Island) to name a few — which are purposefully and ethically raising animals without the use of antibiotics or hormones, and in an environment that allows them to express their unique physiological needs.
Over the 10-week subscription that begins Nov. 20, 2013, members will receive a mixture of beef, pork, chicken, duck and lamb, and perhaps a few surprises like water buffalo and local Ocean Wise fish. A typical weekly Beasty Box will contain two or more servings of a prime cut of raw meat, cured meat or sausage and a prepared item such as soup, sauce, stew or meat pie.
The winter Beasty Box is priced at $490 and will be available for pickup at a variety of locations across Greater Vancouver, including: Re-Up BBQ at the River Market in New Westminster, Urban Digs Farm in Burnaby, Harvest Community Foods in Vancouver’s Strathcona neighbourhood and West Broadway Meat Co. in Vancouver’s West Side. Other pickup locations may be announced shortly to meet the geographical demand of Beasty Box members.
For more information or to subscribe, visit www.beastybox.com. Given the nature of the program, there are an extremely limited number of subscriptions available, so interested parties are encouraged not to delay.
About Re-Up BBQ
The Re-Up BBQ was launched by four passionate partners — Michael and Lindsay Kaisaris, Chester Carey and Jose Rosales-Lopez — who have dedicated themselves to cooking American cuisine and Southern BBQ sourced from local, small-scale farms that practice ethical farming methods. Born from a Food Cart from the City of Vancouver’s inaugural lottery in 2010, Re-Up has evolved into a popular counter-service restaurant located at the River Market in New Westminster. In addition to their line of delicious, ready-to-go food items such as pulled pork, smoked bacon, BBQ ribs and holiday turkey boxes, Re-Up offers custom BBQ catering and often hosts fun food events. www.reupbbq.com

About Urban Digs Farm
Urban Digs is a small family farm based in South Burnaby in a pocket of precious Agricultural Land Reserve less than 20km away from the restaurants and families they grow for. Urban Digs strives to grow good, wholesome food in a way that is environmentally, socially and financially sustainable. In addition to the Beasty Box, Urban Digs supplies meat, eggs and produce to Vancouver’s finest farm-to-table restaurants, and also offers their products direct-to-consumer through farmers markets and their seasonal harvest box programs.  www.urbandigsfarm.com